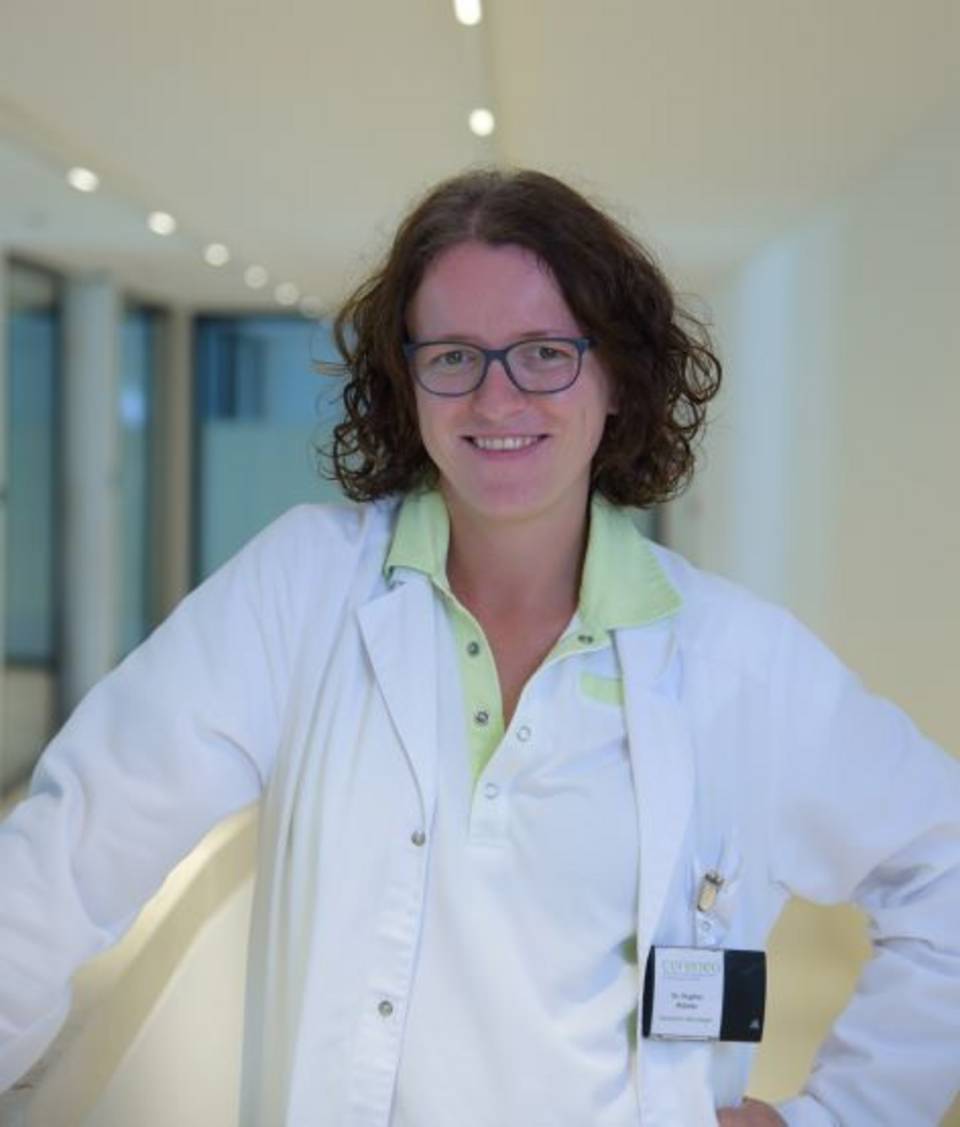 Rebeka joined cereneo in April 2019. For her, neurology is the most interesting and fascinating subject in medicine because neurological diseases are so diverse in their presentation. She sees a great opportunity in individualized neurorehabilitation, which is tailored to a patient’s specific and individual symptoms to best treat their neurological deficits.

Rebeka, from April 1st to June 31st, 2021, you did further training in the treatment of Parkinson patients at the University Hospital in Zurich. What was your motivation for that?

Parkinson’s is a disease about which we still know little in many respects, but it is also an area of flourishing research. I was motivated above all by Dr. Baumann-Vogel to further my knowledge about Parkinson’s disease. Dr. Baumann-Vogel is a specialist in Parkinson’s and is also very engaged in research. She has treated Parkinson’s patients at cereneo for a while. In her work here at cereneo, I have already been able to learn a lot from her. It gives us the opportunity to treat patients with Parkinson’s even better at cereneo.

What was the focus of your training?

Through the training, I have had the opportunity to exchange ideas with experts and have access to the latest findings and publications from the research department.

To what extent does your training help in the treatment of Parkinson’s patients at cereneo?

The specialised training gives us the opportunity to treat more patients who need rehabilitation after having received a brain stimulator. There are only a few rehabilitation clinics in Switzerland that offer such treatment. Patients from abroad, who do not have access to rehabilitation in their own country, can also be treated by us. The focus here is on the correct adjustment of medication and stimulation techniques.

The stimulation is carried out via a brain pacemaker. Electrodes are implanted in the brain and can be adjusted and fine-tuned with an external device. In addition to intensive movement and speech therapy, we help patients learn how to control this device so they can make fine adjustments themselves. They learn which signals are important. As a result, a patient no longer has to visit the doctor every week for adjustments, but at best can only have the settings checked every 3 months.

How do we cooperate with the USZ in this area in the future?

Parkinson’s is one of the most common diseases of the nervous system. The cause of Parkinson’s is still unknown and there is no cure yet. What exactly happens in Parkinson’s?

There are genetic forms and juvenile Parkinson’s, which can usually occur from age 30 or earlier, and the much more common idiopathic Parkinson’s syndrome. It is known that the dopamine production declines. Unfortunately, physically impairing symptoms usually do not appear until 90% of the body’s own dopamine production has already ceased.

Why is so little known about Parkinson’s disease?

That’s hard to say, but it’s certainly not due to a lack of research. It is an extremely complex disease. It is also difficult to take precautions. In principle, however, a healthy diet and exercise are helpful in preventing Parkinson’s, at least in a severe form, but that is of course no guarantee.

What are typical first symptoms of Parkinson’s disease? And how is it diagnosed?

Relatively recent findings show that disturbances of non-motor functions occur earlier, such as talking in sleep or sleepwalking, incontinence, depression, anxiety, pain, dizziness, and loss of smell, among others. The physical symptoms come much later, such as tremor, muscle stiffness, slowed movements, and the typical facial masking. Especially with the non-motor functions, relatives can sound the alarm early. There are, of course, special diagnostic procedures that can be used to detect the disease like a brain scintigraphy (DaT scan). In general, men are affected much more frequently than women.

What options do affected persons have to make everyday life easier?

Physiotherapy once a week is very important. There are Parkinson’s groups in Zurich. The exchange among affected people helps a lot. Patients can give each other tips and advice. In Zurich, for example, there are special activities for Parkinson’s patients such as tango dancing or special gymnastics classes.

Is it possible to significantly slow down the course of the disease if it is diagnosed at an early stage?

Yes, that’s very well possible, the earlier Parkinson’s is diagnosed, the better. With early treatment, you can delay the onset of severe symptoms for years. However, it is not possible to prevent symptoms altogether.
Precise medication is very difficult and takes time. The disease has very individual courses, so it is difficult to standardize the treatment, no two patients are the same and therefore a tailor-made therapy is crucial.
The environment for Parkinson’s patients is very important and long-term treatment with the same physician should be made possible. It is imperative to involve relatives in the therapy. The better the physician knows the patient, the better the treatment can be tailored to the specific needs of each patient.

How important is an impatient rehabilitation?

Can the course of Parkinson’s be slowed down by regular in rehabilitation stays?

Are there new treatment options to curb the progression of Parkinson’s?

The best treatment at the moment is deep brain stimulation by means of a brain pacemaker or medication. In terms of medication, improved formulas are being launched regularly.
The latest in Parkinson’s research is MR-guided focused ultrasound, which can be used to treat tremor very well, but this is only one symptom of many.

What do you recommend to a Parkinson’s patient when they leave our clinic after a rehabilitation stay?

I recommend further treatment with a neurologist who is an expert for Parkinson’s disease. For patients from the Zurich area, the Parkinson’s outpatient consultation at USZ is of course a good choice. The medication must be adjusted frequently even after the rehabilitation stay and attention must also be paid to the non-motor symptoms. In any case, physiotherapy should be continued at least 1x per week on an outpatient basis, with a therapist close to home or with teletherapy. 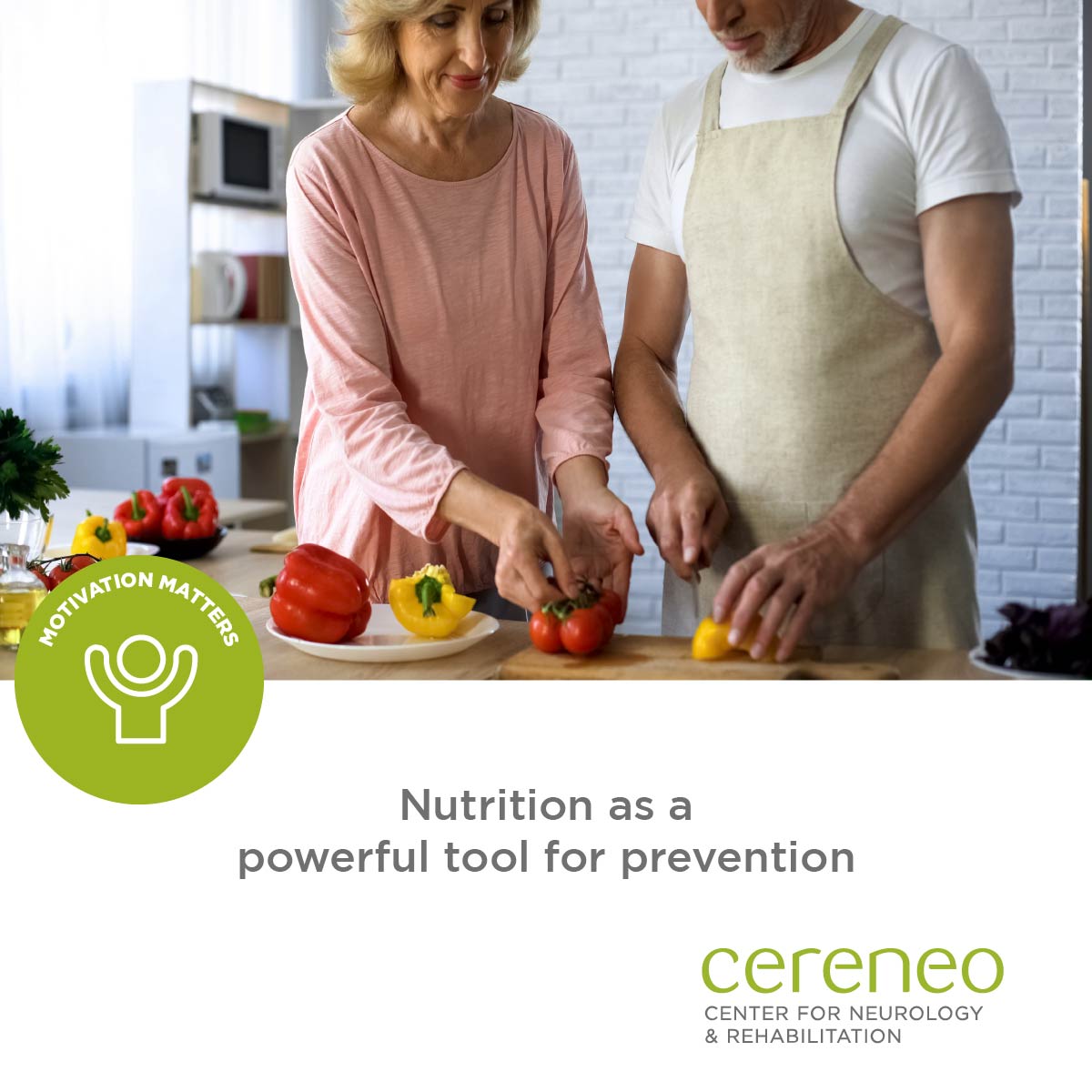 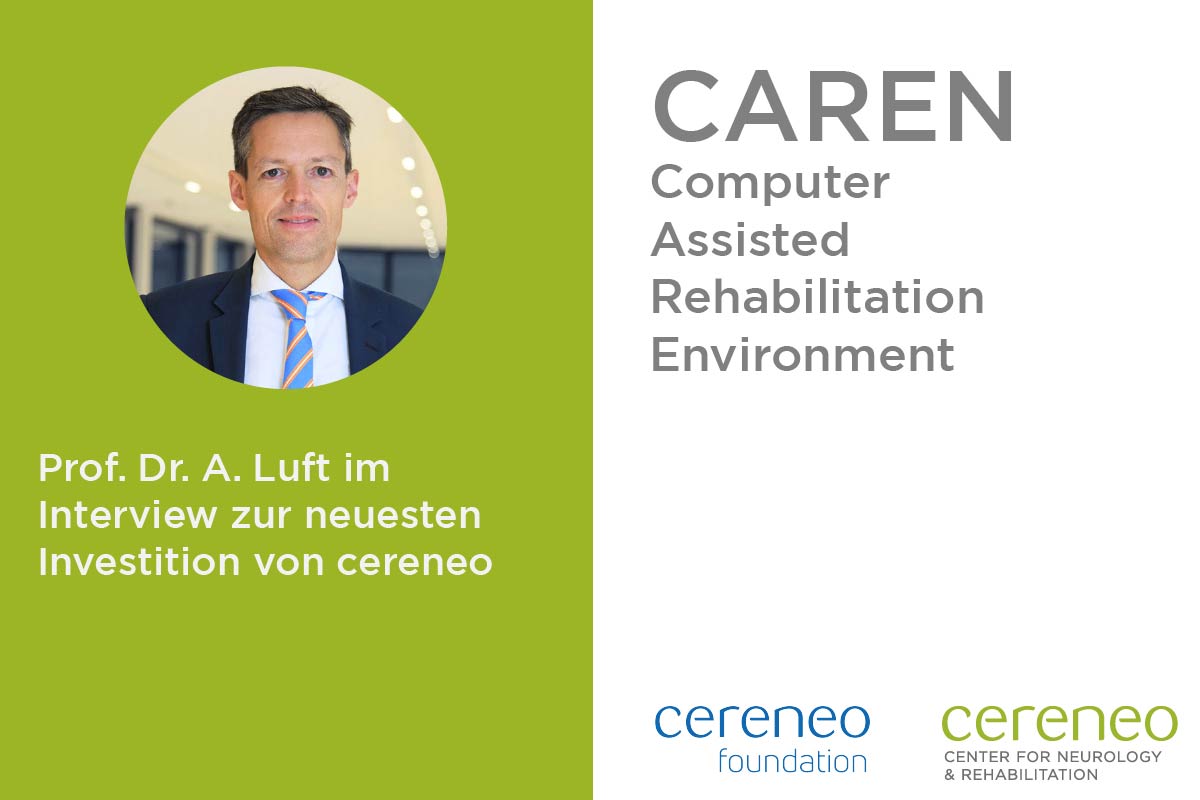 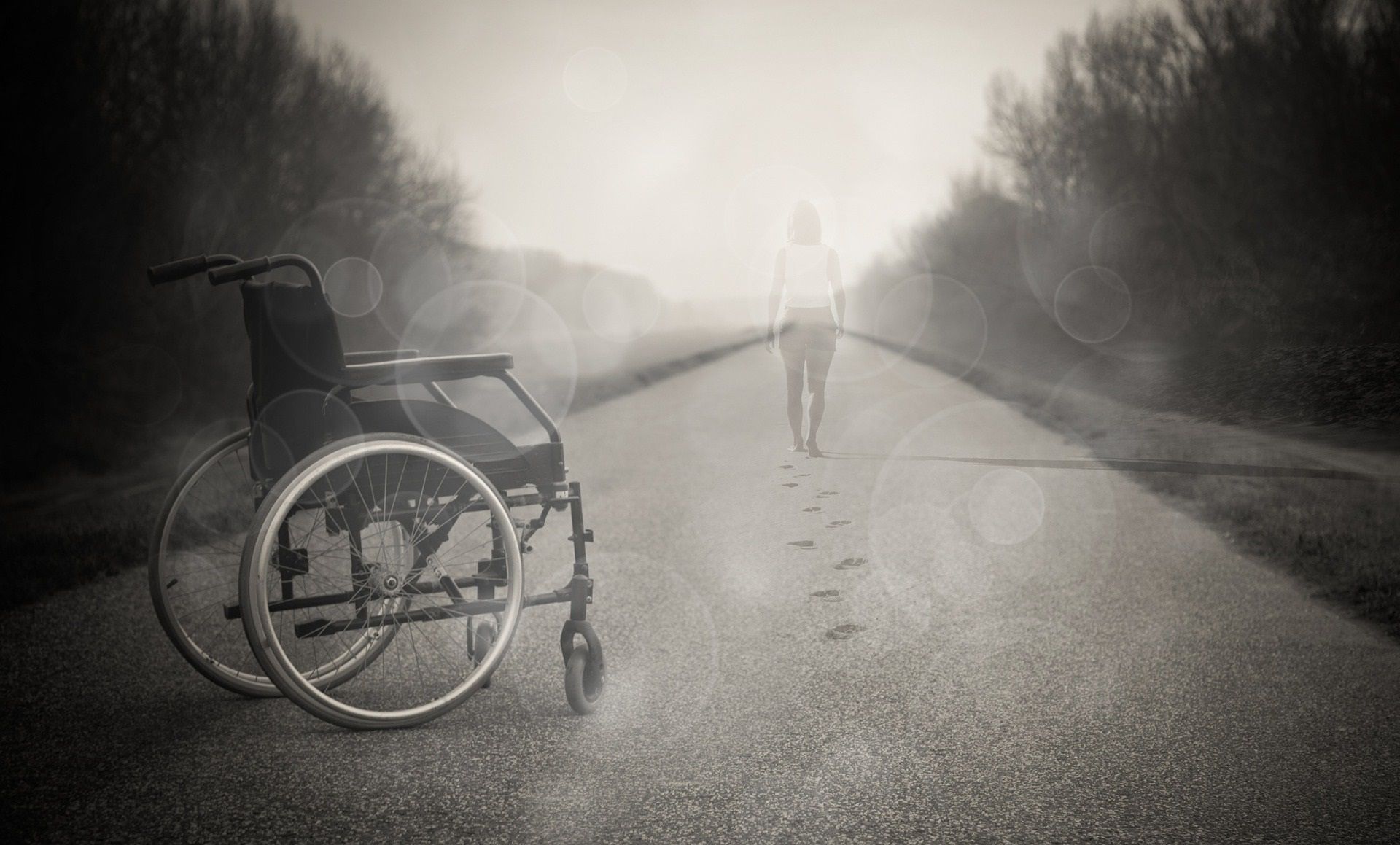 Creating awareness for stroke and how to reduce the risks 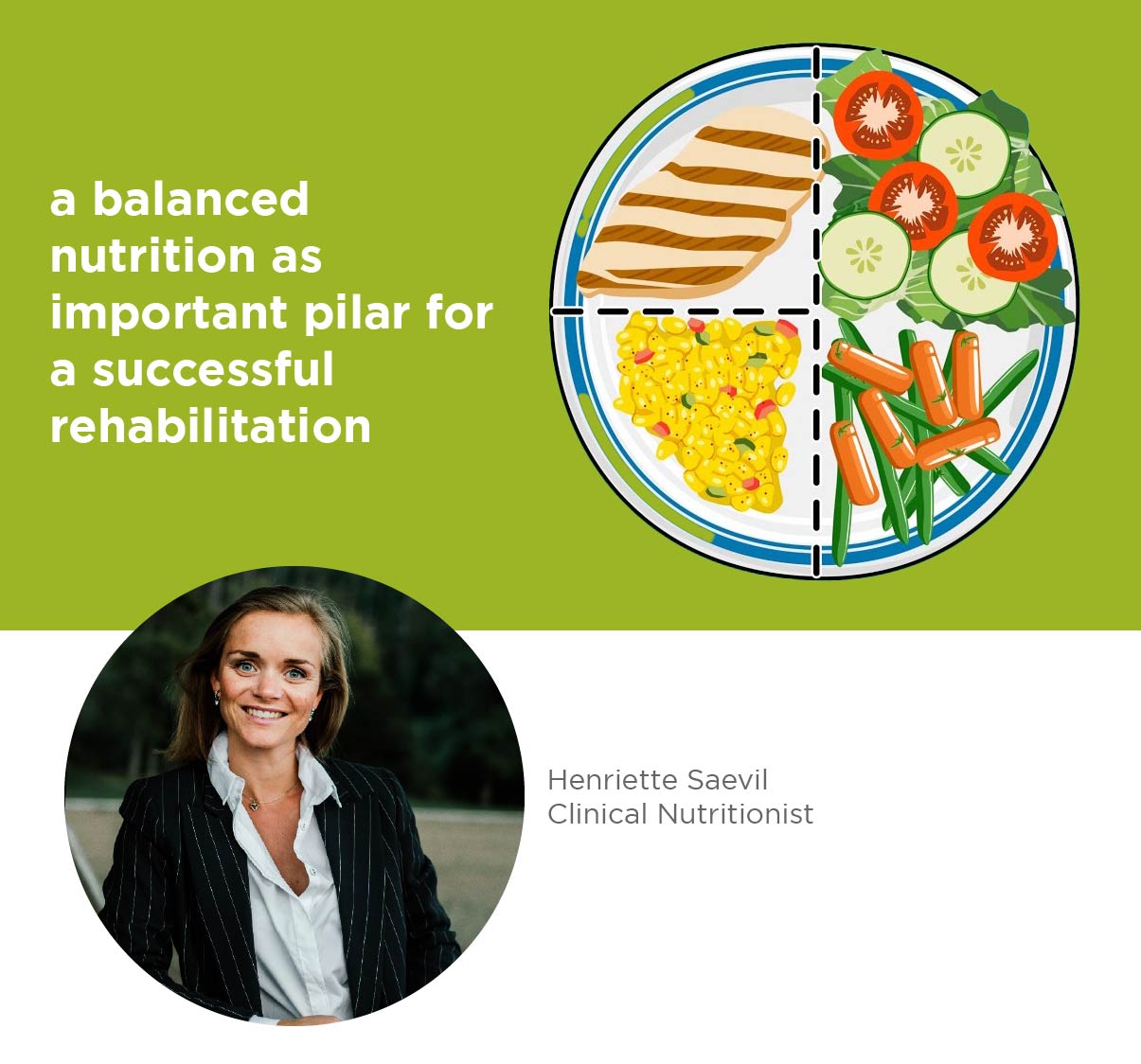 Nutrition as a pillar for successful rehabilitation

At cereneo we focus on the rehabilitation of neurological diseases or disorders. Stroke is worldwide the number 1 reason for a permanent impairment affecting neurological

Creating awareness for stroke and how to reduce the risks

A stroke is worldwide the number 1 reason for a permanent impairment. Globally, one in four people above the age of 25 will have a 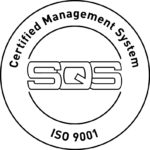